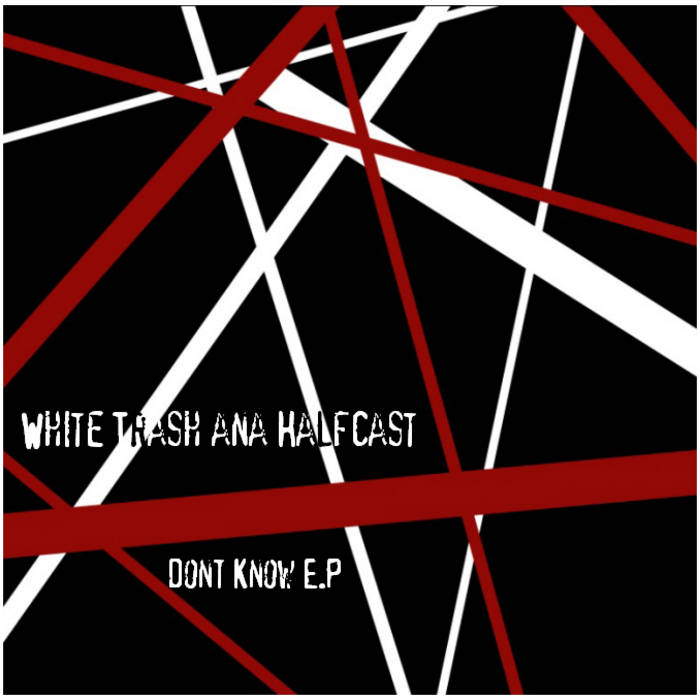 This is the first e.p from crazy Liverpool live band 'White Trash ana Halfcast'. It was quite a mixture of energies and sounds at their gigs, going from German Ranting Techno bull-horned screams about sex doggy style, to epic aromas of white reggae, to 1950s perfect pop song points, all delivered with a sincerity and a bit of craziness by the front man wearing a priest collar. These demo's were recorded on a 4 track after being formed for just over a month.

These tracks attracted a lot of interest and they signed a management deal with Monochrome who also looked after the excellent Seal Cub Clubbing Club. Supporting the Seals a lot in Liverpool and London the band evolved rapidly and became a very exciting live show.

White Trash ana Halfcast dismantled operations as a band in early 2009 after 3 year memorable years. The singer and guitarist went on to form 'The Dawn Fanfare' and Guttermask respectively.

All tracks written and produced by White Trash ana Halfcast.

"I Dont know what it is about these guys, but there's something. I saw them at the first gig they played at the Hotel California, and i really dont think i have ever seen anything like it. The performance, the music, the image. Everything just seemed to flow. They have what you would call 'an edge' over any other band in the Wirral, quite possibly the whole of England. When they opened with their first song, 'Can You Dig It' I got the goose pimples on the back of my neck. It's like Hip Hop mixed with Dance mixed with Rock. With some pretty nifty white mans rapping, I was immediately hooked. With a certain venom in his tongue, James Jones delivered the vocals reminiscent of Run DMC. One verse seemed to stick out; "All of the time, got to keep it clean, you get hooked, get f***ed by the big machine. And all they gotta do to keep a hold of you. Is sell you a story of the chosen few.

I really liked what I had heard so far, and when the next song came in, which was like German techno, filled with words about dirty sex and the affection involved, I really got the sense that there was something different about this band. It was only when the next song came on, I knew I had to get home and check these guys out. Judas to the Masses, kind of a twisted love story about the end of a relationship, or is it? I asked James at the end what that song was about, and who was the Judas he was referring to, he simply smiled and whispered in my ear,"There's a Judas in all of us Jen" This song was one of the highlights for me, the bongos and ska guitar and catchy bass line just seemed to radiate harmony, mixed with a kind of Brian Ferry vocal line, I didn't think it could get any better.....until....I Don't Know, This song had people scared, and i mean it. It starts off with a sample of someone saying, "personal note, when I was a kid my mother told me not to look into the sun, so once when I was six I did". What then followed was an exhilarating blend of Techno drums, bass and guitar, delivered with lyrics and melody that was so intrusive on you, you couldn't help but look in awe at these boys play. During this song the vibrations off the stage made a pint of lager fall from its table and smash on the floor. This was the sign, the sign that these boys had arrived, and where seriously gonna throw into question your average guitar band, that are ten a penny these days.

It was then when they finished with a track called Livin' Again - sort of a happy hardcore dance track, mixed with fast melodies and reverberant synths, Each band member was introduced and gave a big OY OY on every turn. The buzz from the audience and the atmosphere in the place was second to none, I haven't seen a local band generate this much energy in all my years of journalism. You really need to stay tuned to follow these guys. I already hear a Liverpool label are interested, hardly surprising. I have my ticket for the next gig and I'm lookin' forward to see how these guys follow up the last show."